1971. New one-parameter fit to the proton electromagnetic
form factor which improved on the traditional dipole formula.

1980. First examples of grand unification of flavour
including an SU(9) model.

1995. Introduction of binary tetrahedral group as flavour symmetry
for quarks and leptons.

2002. Studied the allowed texture zeroes in the neutrino mass
matrix.

2015. Proposal that the dark matter constituents are primordial
black holes with many solar masses.

2018. Proposed as the reason for the existence of cosmological
dark matter the compliance of the entropy of the universe with
the second law of thermodynamics.

2020. Co-discoverer of general theorem on hierarchies of masses
and mixing angles in particle theory flavour physics. 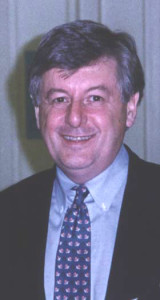